Home » GENERA D » Disperis » Disperis anthoceros
Back to Category Overview
Total images in all categories: 11,246
Total number of hits on all images: 5,961,602 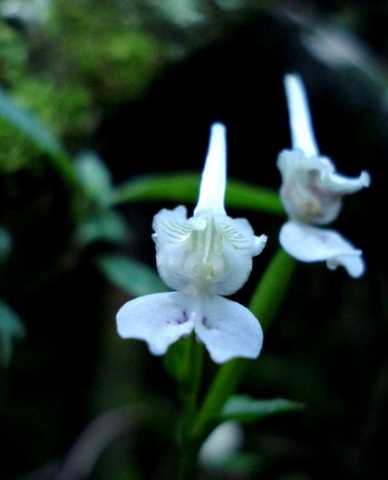 Disperis anthoceros is a terrestrial or semi-terrestrial orchid, a small and slender herb reaching heights from 10cm to 27 cm. A flowering stem grows annually from a pair of small ovoid to spherical tubers. The stem has some brownish sheaths around it at the base.

In South Africa the species is distributed in KwaZulu-Natal and all four provinces north of the Vaal River. This is but a small part of the plant’s overall distribution that reaches Nigeria and Ethiopia across much of tropical Africa, as well as Madagascar.

The habitat is ravines and evergreen forest floor in shade among leaf litter at altitudes ranging from 800 m to 3000 m. The species is not considered to be threatened in its habitat early in the twenty first century.

It appears as if the subspecies of this plant found in South Africa is subsp. anthoceros, previously known as D. hamadryas. There are two further subspecies, viz. subsp. grandiflora and subsp. humbertii (Lowrey and Wright, 1987; www.orchidspecies.com; www.zimbabweflora.co.zw; www.redlist.sanbi.org).