Home » GENERA C » Colophospermum » Termite mound and mopane tree
Back to Category Overview
Total images in all categories: 11,506
Total number of hits on all images: 6,493,750 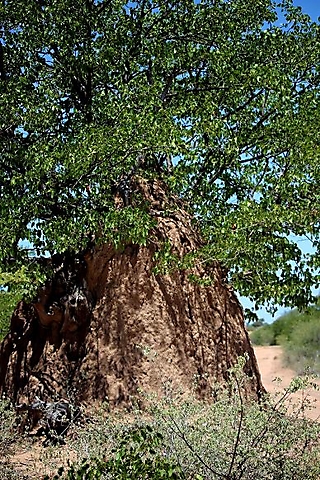 Many birds enjoy the hospitality of mopane trees for their nesting. This mopane is in turn enjoying the benefits of a large termite mound, one of the largest nests found in the bushveld. Termite mounds are common in mopane veld.

Is the tree really enjoying its cohabitation with these partners? No grass, seedlings or saplings grow on termite mounds. Some trees wither prematurely in these conditions, their growth suppressed, although termites, sometimes a pest to people, are important for decomposition in soil, enhancing its fertility.

The tree arrives first, the termites mostly build their mounds under the mopane. The trees may live for a century or two, while a termite mound may be active for several decades. Whereas the mound may sometimes hasten withering of “its” tree according to a study done in northern Namibia, the results are inconsistent and inconclusive, mounds and mopane trees also coexisting in symbiosis.

Mopane may form almost pure or single species stands of trees symbiotically linked with particular root fungi and interacting with neighbours in a mutually beneficial ecology.

The termite biomass of one mound is sometimes compared to one head of cattle, a formidable presence of the tiny, social insects in a single community. Africa is home to about a third of the three thousand termite species on earth. The north of the Kruger National Park alone is said to have more than a million active termite mounds.

These mounds and the soil around them are rich in nutrients, used by farmers as fertiliser and contributing to the sustaining of animal populations in some regions. Some African people also eat termites and the soil of their mounds (Yamashina, 2010: Interactions between termite mounds, trees, and the Zemba people in the mopane savanna in northwest Namibia. African Study Monographs, Suppl. 40: 115-128; Wikipedia).