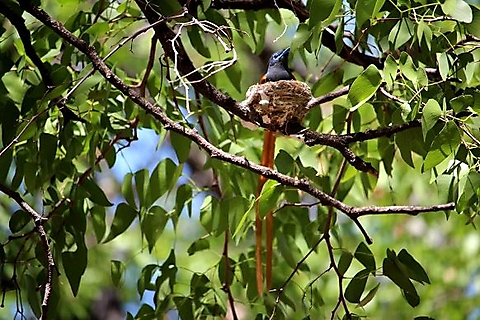 Colophospermum mopane is good for paradise flycatcher (Terpsiphone viridis) nests. In fact, any tree may do. Masterful nest building, but occasional dodgy choices of the particular branch to use sometimes plague these birds. Poor assessment of branch stability and durability for withstanding storm conditions may force the paradise flycatcher to start from scratch in the same breeding season after tragedy.

This may put time pressure on a breeding pair, as they are mostly breeding migrants in South Africa, having to return to other homelands elsewhere in the warmer parts of Africa for before winter. Air travel with young kids can be such a mission!

The parents care for their offspring for only about a week after they leave the nest though. The chicks are then three weeks old; the incubation having taken roughly another two weeks.

The rounded, shallow cup of the nest is constructed from grass, roots and bark, cemented by pieces of stolen spider web and decorated with lichen. It appears comfortable enough, the long-tailed male in picture that shares half of the duties seeing to that.

The two streamer tail feathers of the male are more than twice as long as his body; tail feathers much shorter on the female. Some of these birds, maybe particularly the males, morph from orange-rusty to white during the non-breeding season in Kenya and elsewhere in tropical Africa. Some also have black tail feathers.

These birds have been observed in the Magaliesberg, swapping duties about every twenty minutes on the nest. A particular song by the returning, refreshed partner announces the news to the one on the nest that shift is over, leisure to last for the duration of one shift (Maclean, 1993; Wikipedia).