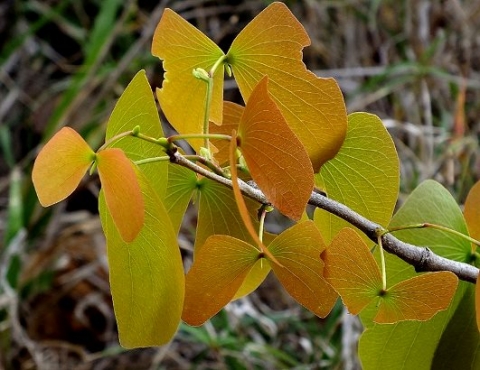 Individual differences abound in the butterfly shapes of these young mopane leaves. Some are angular, others rounded; the jaunty angles between the halves varied. The mopane name, appearing in several forms in southern African indigenous languages, is said to mean butterfly, at least in Shona.

Leaf age affects colour transition from russet to shades of green. This will carry on until the later season when the deeper green of mature leaves sets in. Some veins appear illuminated in the light caught by the camera.

The upper stem in picture is another study in colour change from visible base to tip. The leaf petioles are long, while the absence of petiolules, i.e. leaflet stalks, renders the leaves wing-like, appearing ready for flight (Coates Palgrave, 2002; http://redlist.sanbi.org).