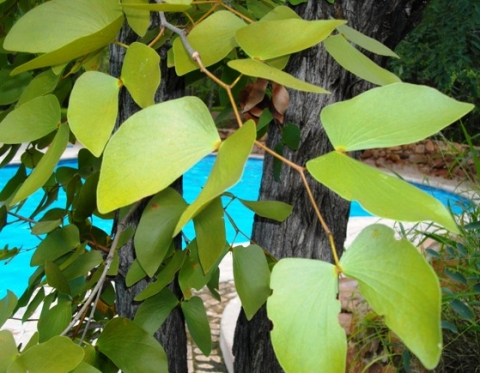 Colophospermum mopane is a small to a large tree, 4 m to 18 m in height (SA Tree List No. 198). Some even reach 30 m, but those grow beyond the South African borders.

The genus is monotypic, there being only on Colophospermum species. It fits into to the Caesalpinioideae subfamily of the Fabaceae, pod-bearing family.

This is the dominant species in large, uninterrupted tracts of the southern tropics of Africa, in a band from Angola and Namibia across Zambia, Zimbabwe and Malawi to Mozambique. The distribution only reaches South Africa in its southerly extreme in the northern part of Limpopo.

The habitat is hot, low altitude flats and floodplains where the trees grow large in alluvial soil. These tall specimens, the cathedral mopanes, are found more to the north.

Mopane also fares well in poorly drained, alkaline soils where it competes very effectively against other tree species of the region. Mopane scrub is common in South Africa where fairly pure stands, near monocultures may predominate, as far as trees are concerned. The species is not considered to be threatened in its habitat early in the twenty first century (Coates Palgrave, 2002; Schmidt, et al, 2002; http://redlist.sanbi.org).