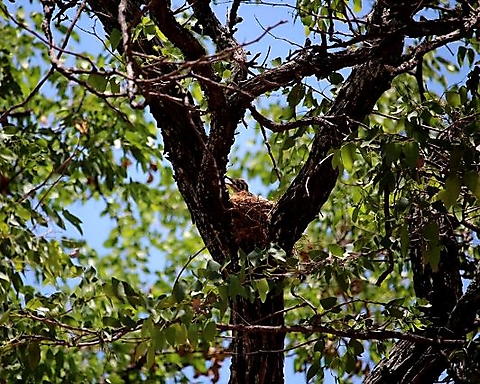 The fork between sturdy branches of a mopane tree is a sound choice for a safety conscious bird like the groundscraper thrush.

All birds have alertness and other safety related habits, otherwise they would not be around; birds being edible and all that. Weak and poor choice specimens, even species that have too few of the right attributes, tend to fall by the wayside soon or gradually, not producing offspring as surely as their smarter relatives.

Behaviour patterns regarding nest safety are set within each species, brought about by the higher survival rate until consistent procreation of those making appropriate choices. This is the natural selection phenomenon that refines species according to their environmental challenges.

Academic courses in theories and principles of strength of building materials is not for the birds. It’s the eye for the right branch, the grass-weaving aptitude and the innate urge making the female prefer the male likely to perform that bring the results, no profound thinking entering the equation. Formal learning in architecture and building sciences is what people do under their equivalent circumstances, being the brain-driven species on earth.

Heaven only knows what might be happening on the many exoplanets suitable to support life, out there at the other ends of many lightyears. Their equivalents of a Darwin might at the right stage of progress discover unthinkably different developmental routes from the data at hand. Or at the equivalent extremities they might possess instead of hands.

On earth we might well think that there will be some similarities between life here and there. Most of the same elements should appear on their periodic tables, depending on the debris from stars died earlier in their particular regions. The similarities might lie in patterns of the life and death fights against the odds, according to alien but still evolutionary principles, functioning in the chance survival games of life.

Who knows, maybe postgraduate students on funny beyond funny spaceships will one day send results of their comparative, galactic fieldwork in recordings of evolutionary sequences instantly via thought processes to their professors, light years away, for doctorates on the consistencies in early and late life patterns that started independently across the universe, as derived from analysing random planetary samples (Maclean, 1993).