Home » GENERA C » Colophospermum » Mopane stem inspected by cardinal woodpeckers
Back to Category Overview
Total images in all categories: 11,506
Total number of hits on all images: 6,493,876 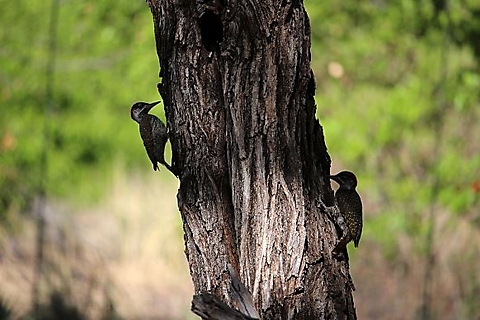 The bark of Colophospermum mopane is dark grey to blackish, in picture some brown is visible in the cracks where younger bark has become visible. The bark is deeply fissured vertically into narrow strips that tend to flake.

The cardinal woodpecker, in Afrikaans the kardinaalspeg, found throughout southern Africa, barring firstly most of Lesotho and a small KwaZulu-Natal Drakensberg part near the border; and secondly these birds, for obvious reasons are also not taken with the treeless Namib Desert.

Being woodpeckers, the ones adapted to mopane veld would know the wood to be hard and heavy, dark red-brown in colour. Searching for beetle larvae, their favourite food, cardinal woodpeckers are a fairly common sight among the mopane, solitary or in pairs.

Excavating a hole for a nest is commonly done by these woodpeckers on dead trees. The mopane wood is presumably even harder when dead and dry. People could get headaches from merely imagining how woodpeckers perform this task.

Breeding happens at any time, mostly from late winter to after midspring. Two white eggs are usually laid, hatched in nearly two weeks by both parents. This only starts when the female is done laying the clutch. The chicks remain in the nest for nearly a month, fed by both parents (Van Wyk and Van Wyk, 1997; Maclean, 1993).