Home » GENERA C » Colophospermum » Colophospermum mopane and redcrested korhaan
Back to Category Overview
Total images in all categories: 11,905
Total number of hits on all images: 7,155,890 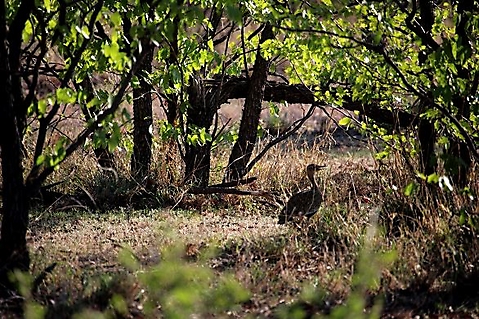 Where Colophospermum mopane is the dominant tree, it will be used by many kinds of local residents adapted to mopane woodland lifestyle. Interdependencies may develop among species or are already of long standing. The birds of mopane veld will use any tree, even alien invaders for their needs, but some may show preferences.

The distribution maps of the redcrested korhaan, in Afrikaans the boskorhaan (bush korhaan), and of mopane trees in South Africa overlap fairly closely, possibly also in the southern African hinterland to the north. Both bird and tree only occur in the northern parts of the country in Limpopo. Though not restricted to mopane woodland, these birds are at home among the mopane, as the one in picture appears to be.

Feeding on insects and spiders, among other things, it could be inspecting the rough mopane bark for camouflaged breakfast morsels. Mopane worms (Imbrasia belina) would be a particularly likely option to encounter here.

These birds also eat fruit, maybe also the mopane pods that cattle like so much, even picking up the dry ones from the ground. Mopane seeds are known to be covered in many small, red resin glands… for those with proclivities to resin-enhanced breakfasts.

The redcrested korhaan is best known for the male’s antics after a rendition of its particular song, (an affair of many, varied notes): A sudden run, a take-off and flying straight up to heights from 10 m to 30 m is followed by tumbling down in characteristic way, with feathers fluffed.

Like a daring parachutist delaying safety measures to the last moment, the wings will open only near the ground, preventing calamity at the last second. A little flutter immediately before landing ends the show, as if nothing unusual has happened.

On the occasion of presenting his best attributes for the benefit of a targeted female in courtship, it has another trick: The brick red crest on the nape is ostentatiously displayed, all neck feathers puffed up.

These birds don’t need the mopane trees for nesting, as a hollow in the ground serves just fine. Maybe the nest will be where the mopane provides some shade, as breeding happens in spring and summer when the mopane woodland near the Limpopo River is quite hot (Coates Palgrave, 2002; Leistner, (Ed.), 2000; Maclean, 1993).