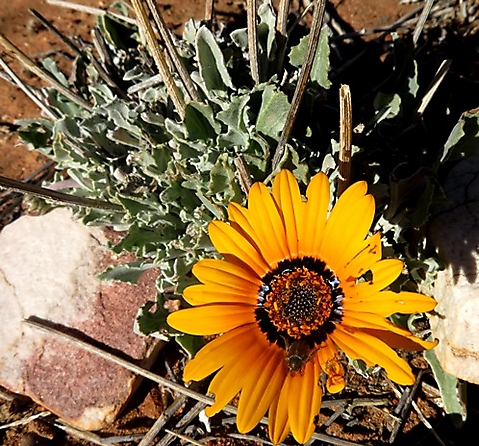 Arctotis is a genus of annual and perennial herbs in the Asteraceae or daisy family, commonly known as African daisy or in Afrikaans gousblom. The plants range from about stemless or tufted to subshrubs, often found on dry, stony slopes. Greyish white woolly or velvety coverings on stems, leaves and involucres are typical, the hairs sometimes glandular.

The leaves are alternate or basal, either sessile or petiolate. The leaf margins are entire to lobed or cleft pinnately to or almost to the midrib.

The flowerheads grow solitary on hollow peduncles bearing many disc and ray florets, often closing in dull weather or late afternoon. The bell-shaped involucre consists of five or six rows of bracts that are ovate or linear in shape. The outer bract tips are pointed or tailed, the margins fringed, while the inner bracts are usually broadly membranous at their tips. The flat receptacle below is honeycombed with pitted margins but no scales.

The ray florets are female with compressed tubes and oblong blades, up to six times longer than the tube and three-toothed at their tips. Ray floret colours vary among white, cream, yellow, orange, pink, purple or bluish, often with darker marks at the base. Staminodes are sometimes present in these functionally female florets. The style is cylindrical or linear, often swollen at the base and thickened at the tip where it branches.

The disc florets are usually bisexual with yellow or dark, five-lobed corollas. The anthers are often spurred, short-tailed or with oval appendage at their tips.

The dry, single-seeded fruits are conical or obovoid, smooth or rough on one side with ribs on the other and furrowed or winged, sometimes hairy. The pappus may have one or two rows of scales, as long as the corolla tube.

There are about 60 Arctotis species, all occurring in southern Africa and into tropical Africa. Numerous cultivars have been developed, widely represented in horticulture.