Home » GENERA A » Arctotis » Arctotis acaulis white flowerheads
Back to Category Overview
Total images in all categories: 11,662
Total number of hits on all images: 6,774,700 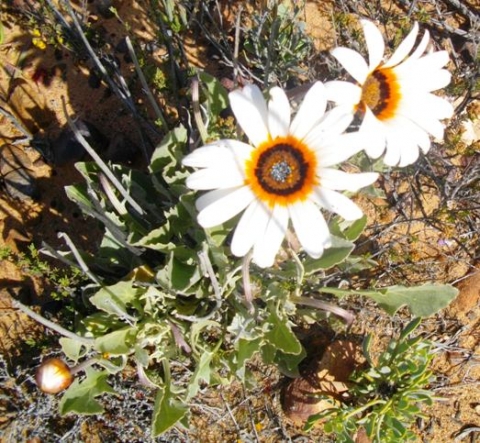 The flowerheads of Arctotis acaulis, large daisy shapes, grow on roughly hairy, fleshy peduncles that emerge directly from the rootstock, as the leaves also do.

Flower colours vary much, including yellow, orange, cream or white and (maybe) salmon. Some of the expansion of the colour range might be from hybridised plants, common among these daisies and their relatives.

The ray florets have dark or yellow markings at the base, forming a conspicuous ring around the central disc. Unopened disc florets are black, acquiring some yellow when they open and display the pollen of the anthers and the styles. Flowering happens from late winter to mid-spring.

The fruit is an achene, a tiny one-seeded dry fruit, attached to both a pappus of papery scales and a tuft of hairs, all for flying well on the winds to what will hopefully be the birthplace of a new plant (Manning and Goldblatt, 1997; Bond and Goldblatt, 1984; http://pza.sanbi.org).