Home » GENERA A » Arctotis » Arctotis acaulis back view
Back to Category Overview
Total images in all categories: 11,662
Total number of hits on all images: 6,774,700 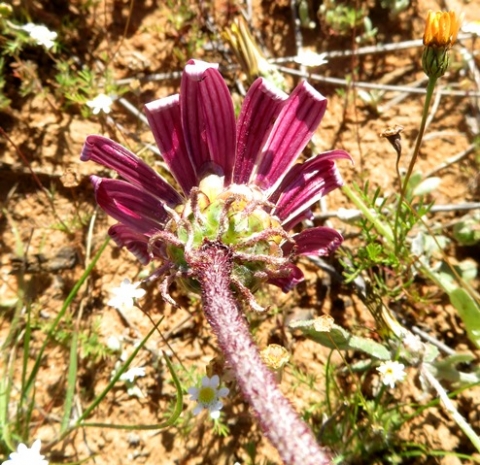 Previous
Image 2 of 55
Next

Four pinkish purple lines are parallel on the outside surface of each ray floret in the Arctotis acaulis flowerhead. The pale inside surfaces are just visible at the short, recurved blade tips.

The faintly ribbed peduncle has sparsely scattered purplish stubble along its light coloured, cylindrical surface. The involucre, pale green near its base, has both thin, brown-tailed and broadly rounded bracts in its composition (Manning, 2007; iNaturalist).