Home » GENERA A » Arctotis » Arctotis acaulis at Kagga Kamma
Back to Category Overview
Total images in all categories: 11,662
Total number of hits on all images: 6,774,758 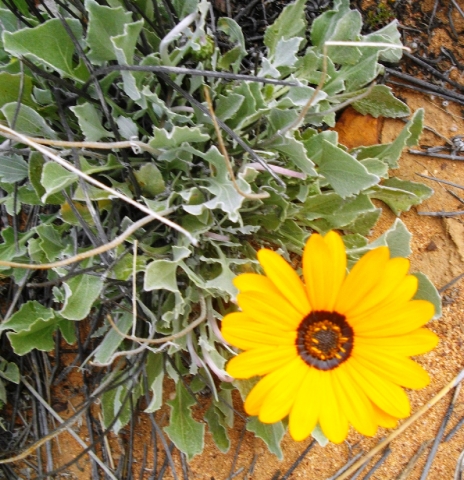 Previous
Image 1 of 55
Next

Arctotis acaulis, in Afrikaans commonly the renostergousblom (rhinoceros marigold), is a stemless perennial reaching 20 cm to 30 cm in height.

The plant grows leaves and flowers from its tuberous rootstock. Acaulis means stemless, the feature implying that with no stem there are no branches. The plant in picture shows that the leaf tuft may become large, many-leaved as well as many-flowered.

The species distribution of A. acaulis is in the Western Cape from the Cape Peninsula northwards to southern Namaqualand and Calvinia in the Northern Cape and eastwards to Swellendam.

The habitat is clay, gravel or sandy flats and slopes in biomes such as fynbos, renosterveld, succulent Karoo and Nama Karoo. The species is not considered to be threatened in its habitat early in the twenty first century (Manning and Goldblatt, 1997; Bond and Goldblatt, 1984; http://pza.sanbi.org; www.redlist.sanbi.org).