Home » GENERA A » Arctotis » Arctotis acaulis by the sea
Back to Category Overview
Total images in all categories: 11,662
Total number of hits on all images: 6,774,643

Arctotis acaulis by the sea 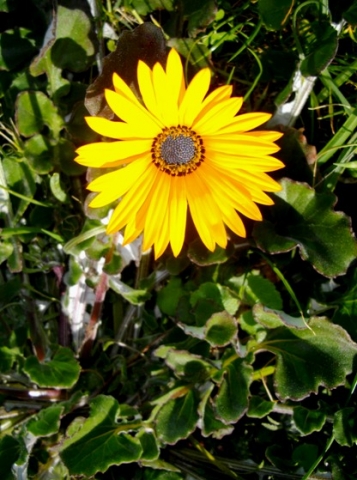 Previous
Image 3 of 55
Next

The leaves of the renostergousblom may be dark to olive green as seen on this plant growing near the beach at Onrus. There are forms with dark red hues upon their upper leaf surfaces, as well as the grey-leaved plants also shown in this Album. Although the leaves are roughly hairy on top (and grey-felted below), a faint gloss may be present above in spite of and among the hairiness.

Three to five distinct veins radiate from the leaf base to the margins. The common toothing of the margins is present, sometimes appearing more like scalloping.

The leaf stalks are creamy green or reddish. The flowerhead stalks are dark- or faint-lined longitudinally, greyish or dull red to purplish and coarsely hairy.

The inner bracts of the flowerhead involucre are rounded, papery and translucent; the outer ones narrow, woolly and elongated conspicuously like a ring of little tails.

There are two distinct rings present in the flowerhead centre in picture: the outer one consists of dark brown markings on the ray floret bases, the inner one is the temporary division between open disc florets (yellow) and closed ones (black) in the centre.

Lower surfaces of the rays may be reddish, purple or faintly brown (Manning, 2007; Privett and Lutzeyer, 2010; iNaturalist).