Home » GENERA A » Arctotis » Arctotis arctotoides flowerhead
Back to Category Overview
Total images in all categories: 11,779
Total number of hits on all images: 6,931,958 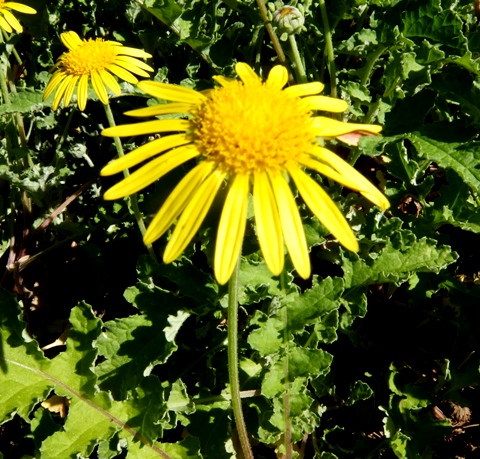 The flowerheads of Arctotis arctotoides are golden yellow, both on the central disc and the single row of oblong rays that sag here, lower than the disc; the rays are also sometimes seen ascending slightly above the disc. The flowerhead (capitulum) is borne solitary on a leafless, but hairy, fleshy and hollow peduncle. Flowerhead diameter ranges between 2,5 cm and 4 cm.

The (female) ray florets in picture are longitudinally grooved and round-tipped, while pointed tips also occur. The rays are reddish purple on their lower surfaces. The tiny disc florets are fertile, five-lobed. When they disappear, small brown seeds may be visible for a while in the flowerhead base, about a month after the flowering. The involucre comprises one row of oblong, hairy bracts.

Bees, the primary pollinators, are active on sunny days among the flowers that last for a few days each (Manning, 2009; Gledhill, 1981; iSpot; www.plantzafrica.com).