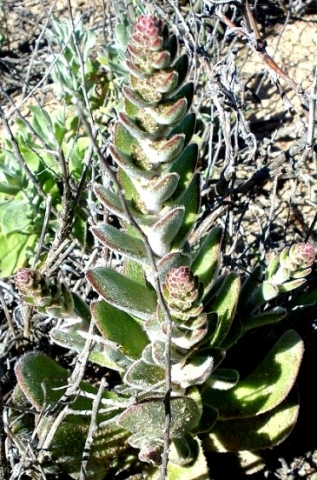 Crassula tomentosa var. tomentosa is a perennial or biennial herb that grows a few stems to 60 cm in height. There are two recognised subspecies of C. tomentosa, the other one being C. tomentosa var. glabrifolia, suggesting smooth leaves and known to occur in the Gifberg near Vanrhynsdorp.

The leaves in picture can be seen to be covered in whitish hairs. They are succulent, obovate with red on the upper parts of the margins. Leaf arrangement is four vertical arrays up the stems, ascending in orientation, decreasing in size on the way up in a neatly regular pattern.

The flowers that appear from late winter to midsummer are white or yellow. This specimen was photographed end August near Lamberts Bay, growing in sandy soil. It is also found among rocks.

The distribution lies in the Western Cape and Northern Cape, as well as in the south of Namibia. The plant is not considered to be threatened in its habitat early in the twenty first century (Smith, et al, 1997; iSpot; Bond and Goldblatt, 1984; http://redlist.sanbi.org).