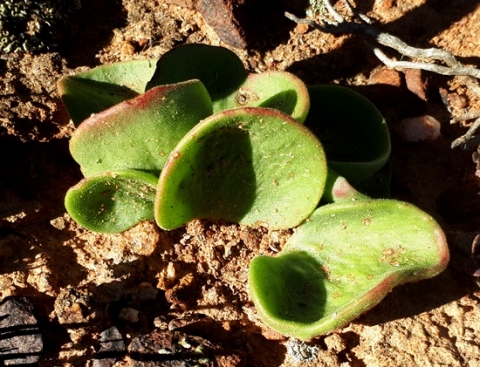 Crassula tomentosa var. glabrifolia is a dwarf leaf succulent that branches to form a small clump lasting for a year or two.

The few leaf rosettes deviate from the circular in leaves positioned as if in a small book, aligned parallel next to each other, especially in the centre of the rosette. The leaves are more broadly rounded than ovate or obovate, flatly disc-like and green, grey or purplish brown.

The hairs usually growing along the leaf margins are conspicuous, while the blade surfaces are glabrous or hairless. The plant in picture seen in Namaqualand had no hairs at all.

The species distribution is in the Western Cape, the west of the Northern Cape and slightly into southern Namibia.

The plants grow in the winter rainfall region, mostly receiving low amounts of it. Plants are found in sandy soil often in rocky places. The species is not considered to be threatened in its habitat early in the twenty first century (iNaturalist; http://redlist.sanbi.org).