Home » GENERA B-C » Crassula » Crassula umbella
Back to Category Overview
Total images in all categories: 8,899
Total number of hits on all images: 3,869,981 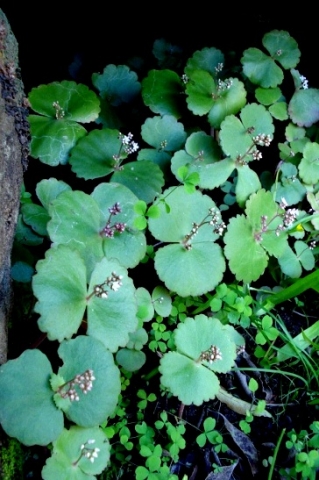 Crassula umbella is a small (10 cm) perennial herb growing from a small tuber. Each plant produces one pair of two opposite kidney-shaped leaves, fused to each other a little where they meet the stem. The leaves are soft, succulent and shiny. They may have scalloped margins. The appearance of an almost stem-circling tiny green umbrella brings appeal. The not very common name of fairy bell plakkie is sometimes seen.

The late winter and early spring flowers are tiny, white to faintly creamy green and star-shaped. They grow in spaced clusters up a slender, erect, whitish or dark stalk.

The distribution area lies from the Richtersveld down the west coast to the Cape and the Little Karoo to Humansdorp. The habitat? One finds them in protected spots, the shade of rocks on south facing slopes and under shrubs on lower slopes (Vlok and Schutte-Vlok, 2010; Le Roux, et al, 2005; Bond and Goldblatt, 1984).