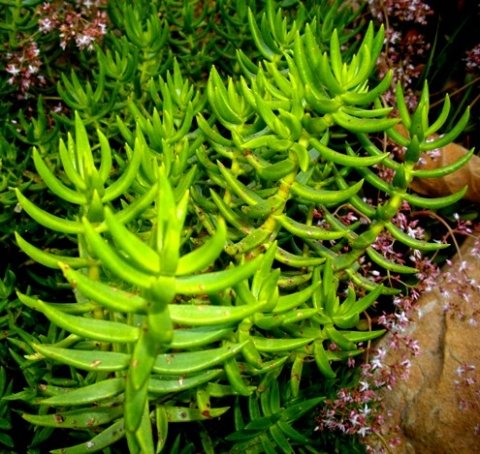 This Crassula tetragona subsp. acutifolia plant was seen in Kirstenbosch during September. Previously known as C. acutifolia (among other names), this is one of six subspecies of C. tetragona. Some of the subspecies may reach 1 m in height, others are considerably smaller.

The four ranks of narrow, succulent green leaves curve up and taper to acutely pointed tips. Both the leaves and the many small, cream or white flowers contribute to the attraction of the plant.

This subspecies is found in the Eastern Cape near the Swartkops River, growing in dry grassland and on rocky hillsides. It is not considered to be threatened in its habitat early in the twenty first century (Wikipedia; JSTOR; www.redlist.sanbi.org).