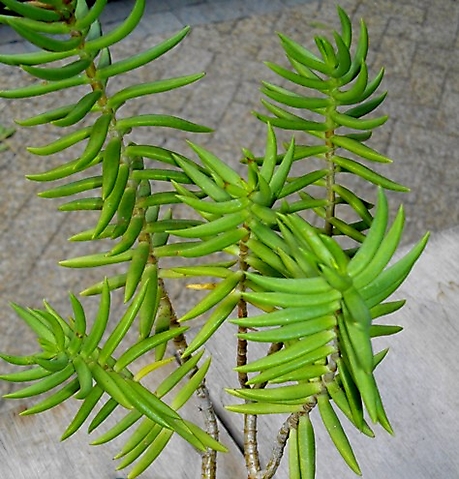 These Crassula tetragona subsp. robusta leaves are in good shape, cared for in the Stellenbosch University Botanical Garden. The smooth, green, decussate leaf pairs curve up near stem-tips, pointed like cattle-horns. Turned straight lower down, some fail to even manage that, sagging in a few cases.

The stems are green among the new leaves, brown to greyish lower down and slightly shiny, ringed at the nodes.

Subsp. robusta occurs only in the Eastern Cape. There are six recognised subspecies of C. tetragona in South Africa, mostly found in the Eastern and Western Cape, some also in the Northern Cape. None of them is considered to be threatened in its habitat early in the twenty first century (iNaturalist; http://redlist.sanbi.org).