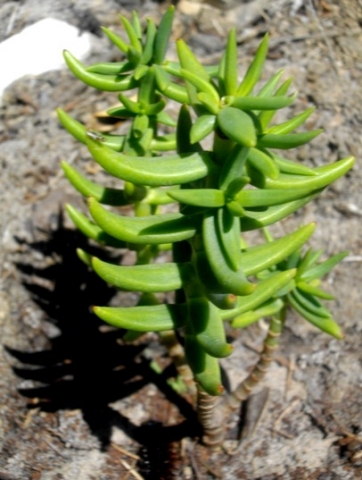 Crassula tetragona is an erect or spreading succulent shrub that grows to 60 cm in the Little Karoo. Lower big stems may become woody with brown bark. The large distribution ranges from Namaqualand across the Karoo to the Eastern Cape. Living condition variations within this region gave the plant a range of developmental challenges facilitating variation. The chromosome number varies, six subspecies have been described.

This Crassula grows in loamy soil among scrub on flats and rocky slopes, mostly in dry habitats. In the arid interior, full sun may bring about a reddish leaf appearance, while semi-shade and rain result in the pale to dark green foliage seen here. There is marked flattening in the leaf-shape above and below (Vlok and Schutte-Vlok, 2010; Wikipedia).