Home » GENERA B-C » Crassula » Crassula tetragona flowers in various stages
Back to Category Overview
Total images in all categories: 9,597
Total number of hits on all images: 4,316,282 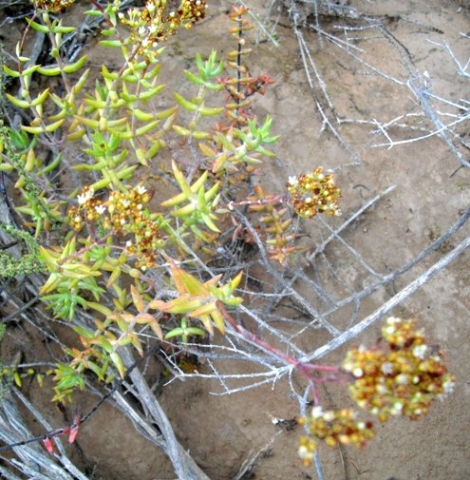 The flowers of Crassula tetragona are creamy white and tubular. They grow in compact, flat-topped clusters on long stalks, blooming in summer.

The leaves may do more though for the plant’s popularity in horticulture. The plant has been dubbed the miniature pine tree and features strongly in the bonsai world. The plant grows easily from stem cuttings.

This Crassula shares the common name of kerkei or karkai with some other Crassula species, notably C. ovata. The name is said to originate from the indigenous languages of Khoi or San people who used to roam the arid land where these plants still grow. The plant was photographed between Worcester and Robertson in the Western Cape (Vlok and Schutte-Vlok, 2010; Wikipedia).