Home » GENERA B-C » Crassula » Crassula tecta leaves
Back to Category Overview
Total images in all categories: 9,742
Total number of hits on all images: 4,371,502 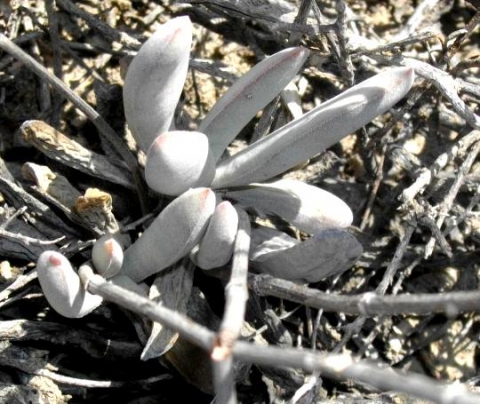 The oblanceolate leaves of Crassula tecta grow in typical Crassula fashion, viz. an opposite, decussate pattern in which every equal leaf pair emerges in a position perpendicular to the one before it on the stem. The inner leaf surface is comparatively flatter than the outer, markedly convex one.

A dense leaf covering of tiny whitish papillae distinguishes the species from its generic relatives. The common name of lizard skin crassula recognises these hard protuberances. One meaning of the Latin word tecta is shelter, possibly referring to this leaf covering as well.

The papillae consist of tiny, slightly flattened, oblong cylinders with blunt, rounded tips. These papillae firstly serve as leaf camouflage among the stones against passing herbivores, also thought to render the leaves unpalatable or less so. Secondly the covering serves as sunscreen for a plant abounding in full sun; the white papillae tips reflecting sunlight.

Some other Crassula species are known to prefer hiding among taller veld shrubs rather than braving full sun. Such a plant characteristic involving an apparently clever choice does not represent reasoned logic. It merely means that those specimens finding themselves in places consistent with the conducive growth habitat of their species tend to survive, whether in shade or sunshine. Seeds will germinate or not wherever they come to rest; their survival probability enhanced when their final station in life offers favourable enough conditions.

People and animals migrate to preferred living areas at will and change them continually to live "better". Plants make do with one location for life or die. Truly identified with their place of birth... unless people intervene and plant them elsewhere (Vlok and Schutte-Vlok, 2010; www.plantzafrica.com).