Home » TYPES » Climbers » Lagenaria sphaerica
Back to Category Overview
Total images in all categories: 11,921
Total number of hits on all images: 7,169,701 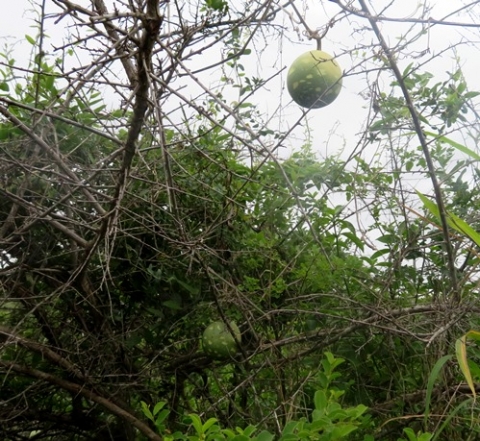 Lagenaria sphaerica, commonly the wild melon or in Afrikaans wildekalbas (wild calabash or gourd) and previously scientifically L. mascarena, is a vigorous, herbaceous climber growing annual stems from a woody rootstock. It reaches tree canopy level, the stems up to 10 m long, assisted by tendrils that are generally forked.

The five-lobed leaves have coarsely toothed margins. Male and female flowers grow on separate plants. The almost white, velvety flowers have five spreading petals. They open towards evening when they exude a fragrance. Flowers are large, about 9 cm in diameter. Flowering happens throughout the year, mostly in summer and autumn.

The species distribution is from the southern Cape east of Knysna, the Eastern Cape through KwaZulu-Natal to Limpopo and in Africa to Somalia.

The habitat is riverine forest in damp, low-lying areas and on coastal dunes. The species is not considered to be threatened in its habitat early in the twenty first century (Pooley, 1998; Onderstall, 1984; iSpot; http://pza.sanbi.org; http://redlist.sanbi.org).