Home » TYPES » Climbers » Maerua juncea subsp. crustata
Back to Category Overview
Total images in all categories: 11,894
Total number of hits on all images: 7,134,633 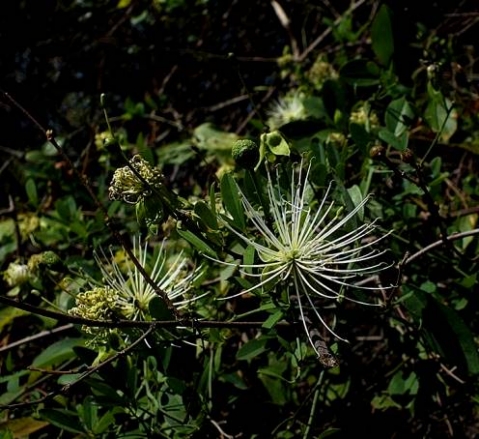 Maerua juncea subsp. crustata, the rough-skinned bush-cherry or in Afrikaans lammerdrol (lamb turd), is a straggling shrub or woody climber that may reach 5 m in height, often entangled in the canopies of neighbouring trees. The stems are covered in lenticels, the young branches green and hairless.

The plant is distributed in the northeast of South Africa, in Gauteng, Limpopo, Mpumalanga and KwaZulu-Natal, also in Africa as far as Tanzania and the DRC.

The habitat is open, deciduous woodland and dry bushveld often in sandy soil at lower elevations. The subspecies is not considered to be threatened in its habitat early in the twenty first century (Schmidt, et al, 2002; Pooley, 1998; Leistner, (Ed.), 2000; iNaturalist; www.zimbabweflora.co.zw; http://redlist.sanbi.org).