Home » TYPES » Climbers » Pergularia daemia subsp. daemia
Back to Category Overview
Total images in all categories: 11,538
Total number of hits on all images: 6,618,695 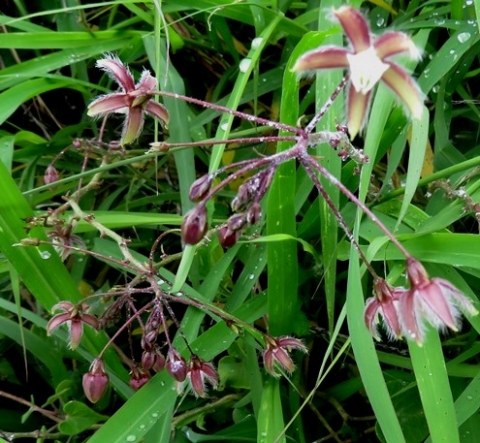 The generic name, Pergularia (Latin), means a place where there are vine trellises. The specific name daemia gives a hint as to the wide distribution of the species: it is the common name of this plant in Arabic.

The distribution, still more surprisingly wide than to Arabia, ranges from Myanmar, Sri Lanka and India to Egypt in north Africa and South Africa. Locally it occurs only in the far northeast of the country, in KwaZulu-Natal and Mpumalanga. The photo was taken in the Mjejane Game Reserve.

The habitat is woodland, tropical and subtropical forest margins. The species is not considered to be threatened in its habitat early in the twenty first century.

The plant has featured in traditional medicine in various places and has been or is eaten as a vegetable similar to spinach, locally called morogo or marog.

In the west of southern Africa there is another subspecies, P. daemia subsp. garipensis known to the Herero as eriko and used similarly as food and medicine (Pooley, 1998; Van Wyk and Gericke, 2000; Germishuizen and Fabian, 1982; Fox and Young, 1982; iSpot; Wikipedia; http://redlist.sanbi.org).