Home » TYPES » Climbers » Lagenaria siceraria
Back to Category Overview
Total images in all categories: 11,921
Total number of hits on all images: 7,169,121 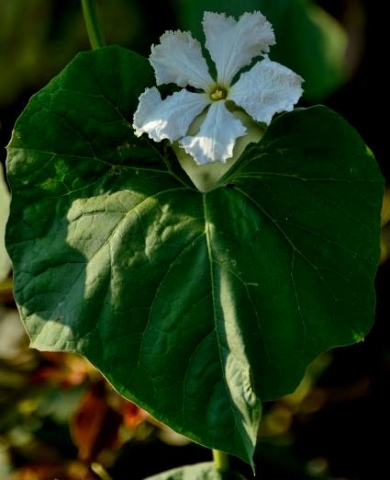 Lagenaria siceraria, commonly the calabash or bottle gourd, kalbas in Afrikaans and previously L. vulgaris botanically, is a creeping and climbing annual with soft, thick branches. They are green and brittle, supported by many, often paired tendrils. This is one of the earliest plants cultivated by the first farming people in the days when agriculture started, around 10 000 to 12 000 years ago.

The geographical origin of the species is unsure, due to its early importance to nomadic  prehistoric humanity. The closed dry fruit has also been proven to float on the sea for months while the seeds remain viable. The forensics regarding the early mobility and utility of this plant are clearly daunting.

The leaves are large (up to 40 cm in diameter) and long-stalked. They are nearly rounded, palmately lobed and slightly blunt-pointed; hairy on their lower surfaces. Hairs are also present on the fleshy leaf stalks and young fruit. The leaves are generally variably shaped in the plant's world-wide adaptations and deliberate development.

In South Africa the plant grows naturally in the northern inland parts, in North West, Gauteng and Limpopo. The plants grow in the open in variable soil types in arid to moderate rainfall regions. The species is not considered to be threatened in its habitat early in the twenty first century.

The leaves are and have been eaten as a vegetable for a very long time. They are still added to porridge or used as a relish. The young fruits feature in popular dishes in Africa, China and elsewhere. Even the young stem shoots are eaten widely.

As happens with popular cultivated plants, the cultivars proliferate and people soon learn which taste bitter, should be avoided as food or the gourds as containers for water or milk (Van Wyk and Gericke, 2000; Leistner, (Ed.), 2000; iNaturalist; http://pza.sanbi.org; http://redlist.sanbi.org).