Home » TYPES » Climbers » Kedrostis capensis
Back to Category Overview
Total images in all categories: 11,506
Total number of hits on all images: 6,499,128 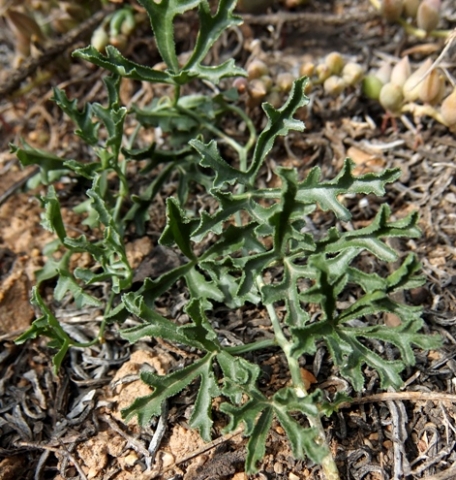 Kedrostis capensis is a climbing or prostrate tuberous perennial. Its branched stems become about 50 cm long. Some curling tendrils among the leaves enhance the climbing capability of the plant.

The leaves are deeply dissected, but have some irregularly positioned short lobes as well. Channelling of the lobes occurs by the upturned, finely serrated leaf margins. The midrib as well as some lateral veins and net-veining may be visible or not. The dark green leaves are slightly fleshy and may be a little hairy, their lower surfaces paler than above. Some young leaves are markedly less dissected, creating a dimorphism of two distinct leaf shapes on the same plant.

The pale yellow flowers, sometimes with some green added, are cup-shaped around the stamens and style in the centre, while the five spreading and hairy corolla lobes form a star-shape around the cup. Flowering happens from mid-spring to mid-autumn. The large and smooth fruits are green, ovoid and melon-like.

The species distribution is large, from Namibia and Namaqualand down the west coast in a broad strip to the Western Cape and then eastwards to the Eastern Cape.

The plants are found on sandy flats, growing in full sun, sometimes among shrubs through which the stems will twine. The species is not considered threatened in its habitat early in the twenty first century (Bond and Goldblatt, 1984; iSpot; www.redlist.sanbi.org).