Home » TYPES » Climbers » Kedrostis capensis leaves
Back to Category Overview
Total images in all categories: 12,081
Total number of hits on all images: 7,379,232 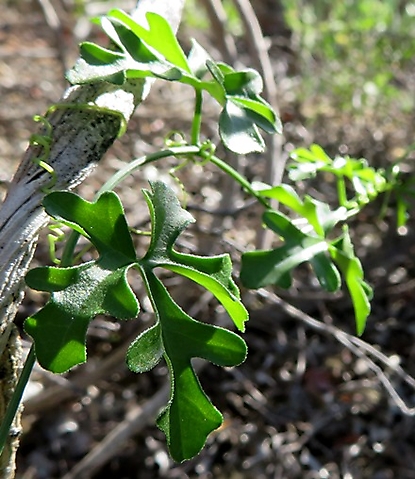 These Kedrostis capensis leaves were seen at Minwater southwest of Oudtshoorn during May, when there were no flowers or fruit on the plant. The rambling stems were climbing onto the lower branches of surrounding shrubs, their corkscrew-like curling tendrils most useful in these efforts.

The long-stalked leaf has three main lobes. The central lobe, narrowest near its base, has a pair of lateral, oblong, arm-like side-lobes ascending with rounded tips below the club-shaped to three-pointed and rounded tip of the main lobe. The lateral pair of big lobes are similar, their arms and tips shorter and wider, all rounded, but with an additional lower lobe from the base, also three-pointed and rounded.

The lateral pair of big lobes curve forward slightly, giving the leaf an overall rounded appearance, like an elaborate jigsaw puzzle piece waiting to be fitted with other pieces into a dark green sheet full of roundly curving lines.

The lobes curve up slightly along their lateral margins or fold in along lobe midribs that are barely visible on the softly mottled and faintly hairy blades (Curtis-Scott, et al, 2020; iNaturalist).