Home » TYPES » Trees » Spirostachys africana bark
Back to Category Overview
Total images in all categories: 11,528
Total number of hits on all images: 6,611,364 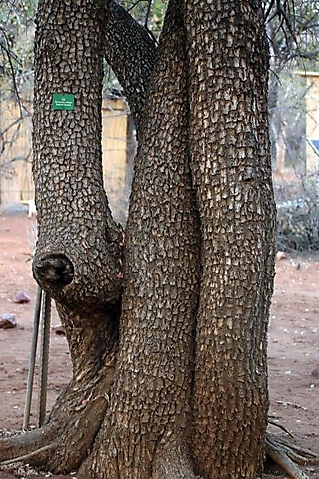 Tamboti bark is distinctive in the way it fissures and cracks into smallish, angular patches of a hard grid pattern. The lumpy fragments are paler than the gaps between them, grown from stem thickening. Possibly also from a little shrinking caused by lost moisture from the young bark, which is initially smooth and brown to pale grey.

The cracking up into mature bark starts on young stems and branches in isolated patches, low down or near forks, spreading across the ageing, expanding parts.

A member of the Euphorbiaceae family, tamboti surface damage brings forth milky latex from the wound. Poisonous to people in every plant part, antelope and farm animals eat the fallen leaves of the deciduous tamboti in winter. People used to store a piece of tamboti wood among clothes as insect repellent. The bark was or is used as a fish poison, while porcupines eat the bark from stem bases and birds eat the fruit.

The wood is near indestructible: Preserved pieces found among the Zimbabwe Ruins were carbon dated to the 12th to 15th centuries (Schmidt, et al, 2002; Coates Palgrave, 2002; Pooley, 1993).