Home » TYPES » Trees » Smodingium argutum
Back to Category Overview
Total images in all categories: 11,635
Total number of hits on all images: 6,753,017 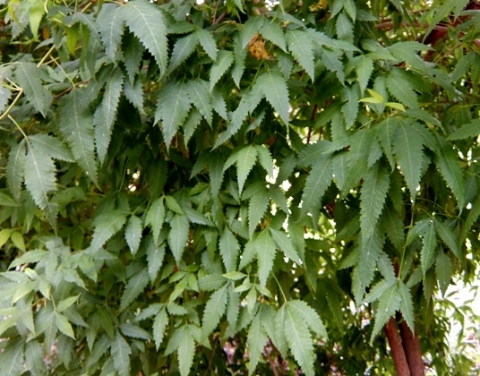 Smodingium argutum, commonly the pain bush or African poison ivy, is a scrambling shrub or small tree of 1 m to 3 m with drooping habit; occasionally it will reach heights around 6 m (SA Tree List No. 367).

It is worth learning how to identify this tree before it abruptly imposes that motivation itself: Apart from being poisonous, the cream coloured sap exuded from damaged plant parts can cause a livid rash that swells and blisters. So do not even touch it; not worth discovering whether one is among the lucky people immune to its hostility. Just the name of the toxic substance(s), the skin irritant referred to as heptadecyl catechols, is off-putting enough. The sap turns black when dried in the air.

These green leaves often have a few red ones among them. They all turn red before they fall from this deciduous tree that is also dioecious, i.e. the sexes are represented by separate trees.

The species distribution ranges from the north of the Eastern Cape through KwaZulu-Natal to the Mpumalanga Lowveld, as well as a discrete distribution occurring around the Vaal River in the northern Free State. It also grows in Lesotho and Swaziland.

The typical habitat is dry woodland and forest margins. The species is not considered to be threatened in its habitat early in the twenty first century (Coates Palgrave, 2002; Pooley, 1993; Wikipedia; www.redlist.sanbi.org).