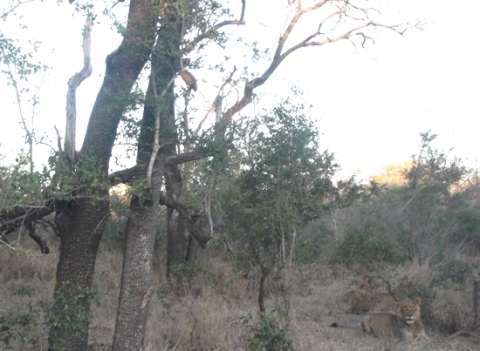 The colour difference between the two erect young tamboti stems standing close together on the left in the photo illustrates why descriptions of the bark usually mention both black and grey colouring. The typical reticulation of the rough bark into rectangular patches is unmistakable. Side branches have already largely been lost, quite high up along the stems. Tamboti stems start off smooth and pale on saplings, the rough bark appearing as the tree matures, usually in patches that spread gradually.

Lions also have colour differences. A rare white form has become well-known since the 1970’sin the Timbavati area, not terribly far from where these commonly coloured ones were photographed. Breeding white lions has now given game parks and zoos these animals in different parts of the world.

Rarity breeds sensation in human society. Fame or notoriety might be attached to anything or anybody unusual by the media or gossip caprice of the day. Owning something outlandish is a common urge for ego boosting, succumbed to by many, especially those with surplus resources and insufficient work.

The more white lions have been bred, the less common they become, defeating the initial objective and artificially modifying the gene pool of lions. Much of this is applicable to the whims relating to the market that drives the growing of garden plant cultivars. May the craze blow over.