Home » TYPES » Trees » Steganotaenia araliacea var. araliacea
Back to Category Overview
Total images in all categories: 11,528
Total number of hits on all images: 6,611,531 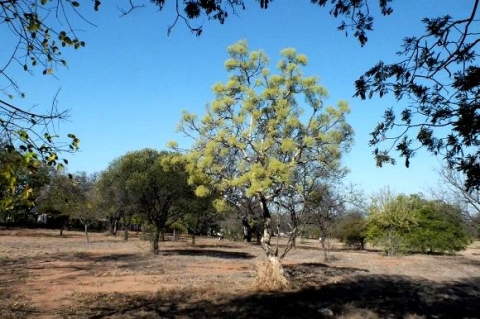 Steganotaenia araliacea var. araliacea, commonly known as the carrot tree or popgun tree, is a deciduous shrub or small, erect or crooked-stemmed tree with irregularly shaped crown from 2 m to 10 m in height (SA Tree List. No. 569).

The pale greenish-yellow bark on the slender stems appears corky and waxy, flaking in white papery strips and rectangles, rough and cracking on old trees and the young branches thick.

The species distribution is in the far northeast of South Africa, only in parts of Mpumalanga and Limpopo. It is present more widely in the rest of southern Africa, well-known in parts of northern Namibia.

The habitat is hot, dry bushveld or woodland, often on stony slopes and rocky outcrops. The species is not considered to be threatened in its habitat early in the twenty first century (Mannheimer and Curtis, (Eds.), 2009; Coates Palgrave, 2002; http://redlist.sanbi.org).