Home » TYPES » Trees » Rauvolfia caffra
Back to Category Overview
Total images in all categories: 11,549
Total number of hits on all images: 6,634,929 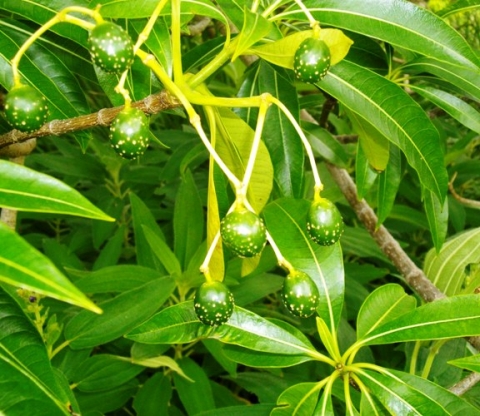 Rauvolfia caffra, the quinine tree occasionally grows to great heights (about 20 m) in conditions where ample water allows for this at forest edges (SA Tree List No. 647). More often it only becomes a small to medium sized tree.

The leaves grow in whorls crowded at the end of the branchlets. They are simple, narrow, obovate to elliptic and have entire margins. Leaves tend to be slightly leathery, shiny above and pale below, with conspicuous net-veining evident on both surfaces.

The fruits are fleshy green drupes covered in the white spots that can be seen in the picture. These fruits become dark purplish and wrinkled as they ripen.

The species distribution is in the provinces north of the Vaal River, the coastal areas of KwaZulu-Natal, the Eastern Cape and the southern Cape into the Western Cape, as well as many central African countries.

The habitat is woodland and forest, particularly riverine forest, swamp forest and forest margins at lower altitudes. The species is not considered to be threatened in its habitat early in the twenty first century.

The tree resembles Breonadia salicina, the mingerhout (Afrikaans) or matumi, which lacks the milky sap or latex found in the quinine tree. This latex played a role as a malaria cure in the past, without positive results. The bark does, however, contain a substance used effectively as a tranquilliser and in reducing blood pressure. Various parts of the tree are used in a multitude of traditional remedies. The wood is soft and pale, suitable for making curios and woodcut objects.

The tree belongs in the Apocynaceae or dogbane family, hence the latex. While this species is the only one occurring naturally in South Africa, the Rauvolfia genus comprises about 85 species, many of them evergreen trees that grow naturally in tropical areas (Coates Palgrave, 2002; Pooley, 1993; Wikipedia; www.redlist.sanbi.org).