Home » TYPES » Trees » Rapanea melanophloeos
Back to Category Overview
Total images in all categories: 11,549
Total number of hits on all images: 6,634,914 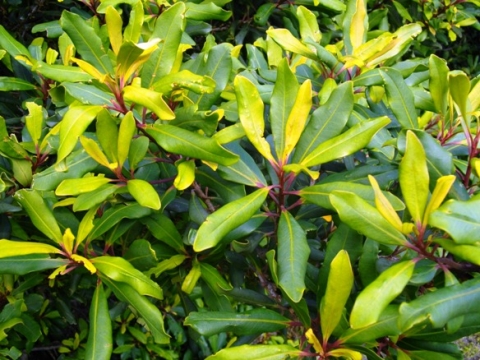 Rapanea melanophloeos, Cape beech or Kaapse boekenhout in Afrikaans, is a medium sized to tall, evergreen tree. Its common height is from 3 m to 6 m, but in forests it may reach 20 m (SA Tree List No. 578).

The leaves cluster towards the branch tips where the petioles and young branches are a distinctively pinkish maroon as in the photo. The leaves are oblong, 10 cm long, leathery, dull dark green and covered in many fine gland dots more visible when held against the light.

The flowers appear in axillary fascicles and where old leaves have dropped off lower down on the branches. They are small and white to greenish. The tree is pollinated by bees and flies.

The species distribution is in the southern and eastern coastal regions of South Africa, from the Cape Peninsula through the Eastern Cape and KwaZulu-Natal. It also grows inland in the Lowveld of Mpumalanga and Limpopo, as well as in parts of Mozambique, Zimbabwe and Zambia.

This is a forest tree, often found close to water or in high rainfall areas, but not exclusively so. The trees grow on mountains as well as in coastal and swampy areas. The species is not considered to be threatened in its habitat early in the twenty first century (Pooley, 1993; Coates Palgrave, 1977; http://redlist.sanbi.org).