Home » TYPES » Trees » Rapanea melanophloeos fruit
Back to Category Overview
Total images in all categories: 11,538
Total number of hits on all images: 6,618,490 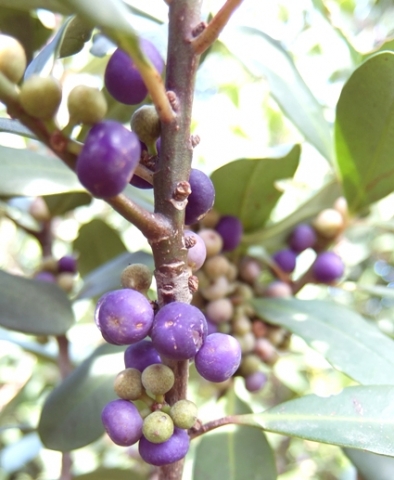 These purple, ripe fruit of Rapanea melanophloeos were seen at close quarters on the Boomslang in Kirstenbosch during April, a late crop according to the literature.

The fruits are softly, but thinly fleshy on short stalks, popular among birds, baboons, monkeys and bushpigs. The small green ones in the photo have mottled surfaces, the ripe ones swelling to 5 mm in diameter. There is an intermediate stage during which the developing fruits are nearly white (Coates Palgrave, 2002; Pooley, 1993).