Home » TYPES » Trees » Rotheca myricoides
Back to Category Overview
Total images in all categories: 11,411
Total number of hits on all images: 6,178,428 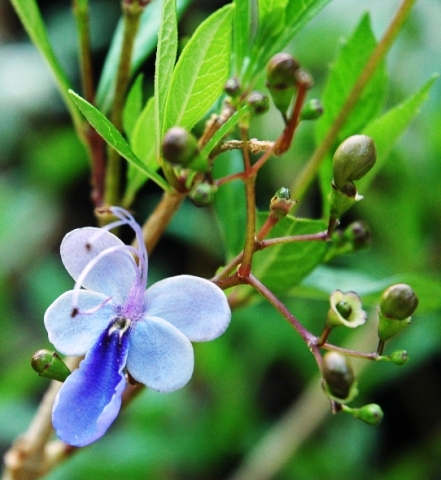 Rotheca myricoides, the butterfly bush or cats-whiskers used to be known as Clerodendrum myricoides. While it often only grows to shrub proportions, trees of up to 8 m bearing these unusual flowers do occur (SA Tree List No. 667.1).

Butterfly bush leaves have a foetid smell when crushed. The red and eventually black fruits are edible.

The species distribution is in the northeast of South Africa, in KwaZulu-Natal, Mpumalanga, Limpopo, Gauteng and North West, as well as over the border in Mozambique, Zimbabwe and further to the north. The large distribution is associated with a wealth of forms of this tree.

The habitat is bushveld, forest margins, rocky hillsides and coastal bush. The species is not considered to be threatened in its habitat early in the twenty first century.

Traditional medicinal uses for the plant exist, as well as remedies for treating livestock. Someone in Florida in the USA reported that the flowers attracted lots of wasps (Coates Palgrave, 2002; Pooley, 1993; http://davesgarden.com; http://redlist.sanbi.org).