Home » TYPES » Trees » Rothmannia capensis
Back to Category Overview
Total images in all categories: 11,411
Total number of hits on all images: 6,178,417 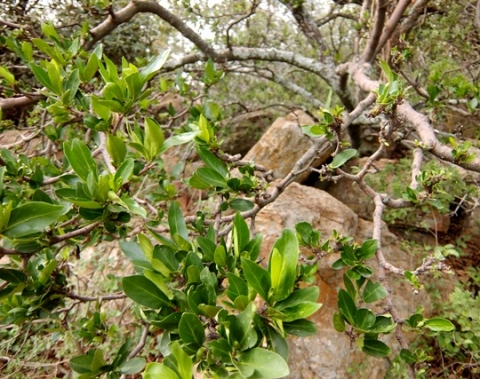 Rothmannia capensis, known as the common rothmannia or in Afrikaans as valskatjiepiering (false gardenia), is an evergreen tree occasionally reaching 20 m in tall forests (SA Tree List No. 693). It may also branch from low down, putting effort into spreading.

The species distribution is a coastal belt along the south of the Western and Eastern Cape, up the east coast through KwaZulu-Natal and the provinces north of the Vaal River. Beyond the border it grows in at least Mozambique, Swaziland and the eastern parts of Botswana.

The R. capensis habitat is evergreen forest, forest margins, wooded hills and ravines, sometimes grassland from sea level to 1600 m. The species is not considered threatened in its habitat early in the twenty first century.

Roots of this tree used to be dug up for concocting traditional remedies for leprosy and rheumatism, maybe still for the latter (Coates Palgrave, 2002; www.redlist.sanbi.org).