Home » TYPES » Trees » Rotheca myricoides flowers and fruit
Back to Category Overview
Total images in all categories: 11,411
Total number of hits on all images: 6,178,419 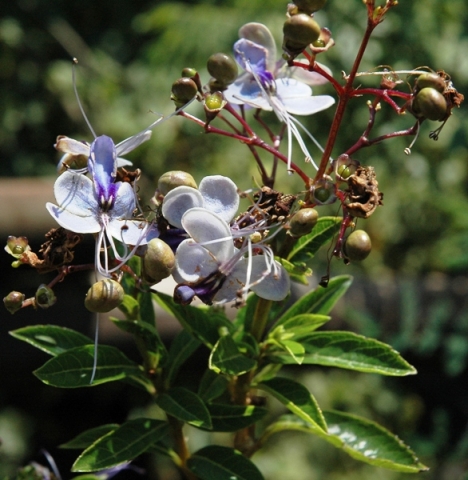 Rotheca myricoides has ovate, obovate or lanceolate leaves with coarsely toothed margins. The leaves may be velvety, even woolly or almost hairless and shiny as in the picture. The leaf base tapers into the petiole. Leaves are opposite or in whorls of three.

The flower has an unusual shape with five corolla lobes arranged in two light blue to almost white pairs and the fifth one either deep blue or deep blue near the base and lighter towards the tip. There is also a pair of white markings at the base of the fifth lobe.

Flowers appear in axillary or terminal clusters during spring and summer.  These greenish fruits will later turn red, then black (Coates Palgrave, 2002; www.missouribotanicalgarden.org).