Home » TYPES » Trees » Rauvolfia caffra young tree
Back to Category Overview
Total images in all categories: 11,549
Total number of hits on all images: 6,634,854 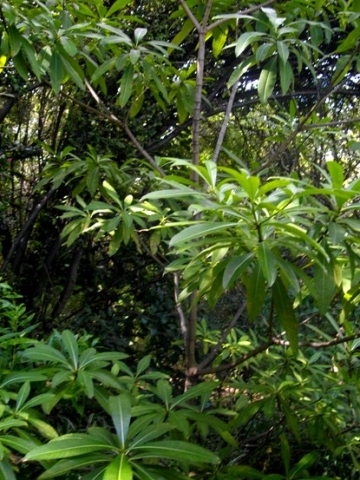 The bare, pale grey stems with leaves remaining only near branch ends can be seen on this young quinine tree. It grows well in places with good ground water, such as this Gauteng garden. One of the several common names of the tree is fittingly waterboekenhout in Afrikaans (meaning water beech tree).

This is a pretty tree that featured both successfully and unsuccessfully in a variety of traditional medicine practices. It is useful to note that some parts of the tree are toxic, reported to still be causing deaths in countries like Tanzania. Particularly the milky latex, used medicinally in various situations, is described in the literature as being toxic. This stresses the importance of knowledge of proper utilisation practices for preventing accidents. This Site should never be used as a guide for trying out any medicinal treatment guesses.

There are alkaloid substances obtained from several Rauvolfia species and used medicinally. They include ajmalicine, also called raubasine, that features in proprietary pharmaceutical products for treating behavioural problems associated with senility, as well as in treating head injuries and strokes (Coates Palgrave, 2002; Van Wyk and Gericke, 2000; Van Wyk and Van Wyk, 1997; Poynton, 1975).