Home » TYPES » Trees » Rapanea gilliana
Back to Category Overview
Total images in all categories: 11,131
Total number of hits on all images: 5,810,374 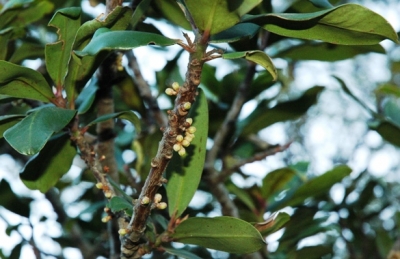 If this is not Rapanea melanophloeos, it has to be R. gilliana, the dwarf Cape-beech, as these are the only two species found in southern Africa. R. gilliana is a shrub or small tree of the Eastern Cape coast, growing on dunes among scrub or on rocky outcrops.

It has oblanceolate leaves with wavy margins rolled under. Its flowers are small and greenish, the oval, one-seeded fruits larger than those of R. melanophloeos, up to 1 cm long. It is unfortunately not known where this photo was taken.

The Rapanea genus of trees and shrubs, even some climbers, consists of about 100 species, forming part of the Myrsinaceae family. Many occur in tropical regions of the globe. They have simple leaves spirally arranged around the stems. The leaves are dotted with glandular scales, especially when young. The small flowers grow in axillary clusters. The sepals and petals are often marked with lines and dots. The stamens are sessile, without filaments. The fruits are fleshy drupes.

The fortunes of the Rapanea genus don't appear positive in South Africa. R. gilliana is endangered early in the twenty first century, while the population of R. melanophloeos is declining, although still considered of least concern (Coates Palgrave, 2002; Van Wyk and Van Wyk, 1997; www.redlist.sanbi.org).