Home » TYPES » Trees » Harpephyllum caffrum
Back to Category Overview
Total images in all categories: 11,118
Total number of hits on all images: 5,787,129 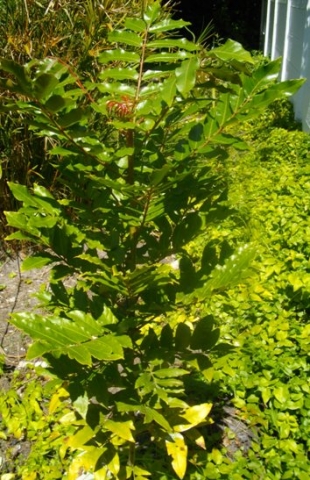 The species distribution is coastal in the Eastern Cape and KwaZulu-Natal and inland in  Mpumalanga and Limpopo. It is also found in eSwatini, Mozambique and Zimbabwe.

The habitat is evergreen and deciduous forests, from sea level to around 1400 m. The species is not considered to be threatened in its habitat early in the twenty first century.

It is very easy to appreciate the popularity of this tree. It grows in many parks and gardens in South Africa and elsewhere. And just as easy to plant one where space allows. The sapling in picture shows just the shiny pinnate (compound) leaves with their wavy edges and a little of the red new growth.

The attractive red fruit, oblong drupes with single seeds, look better than they taste, as they are quite sour. The fruit eating birds, such as louries, Cape parrots, barbets and bulbuls, as wel as animals like baboons, monkeys and bushbabies don’t mind that though (Coates Palgrave, 2002; www.plantzafrica.com; http://redlist.sanbi.org).