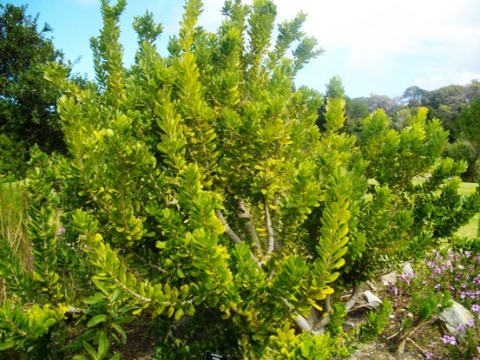 Heeria argentea or rockwood is a shrub or small tree reaching heights around 5 m (SA Tree List No. 368).

This small tree was seen in the Harold Porter National Botanical Garden. The tree belongs to the Anacardiaceae or mango family as do the Ozoroa or resin trees. There is a notable similarity in the parallel leaf veining of rockwood and resin trees.

The species distribution is limited in the southwest of the Western Cape from the northern Cederberg to the Hottentots Holland Mountains.

The habitat is rocky mountain slopes among fynbos. The species is not considered to be threatened in its habitat early in the twenty first century.

It is possible that this tree may have been decimated long ago as a much used species. Apart from being used as firewood, several other early farmer activities involved this tree. The bark of H. argentea was used in tanning. The wood was used for wagon brake-blocks (as happened with the waboom, Protea nitida).

When the fruits fall among the rocks, they are eagerly consumed by the dassies (hyrax) that live there. This may contribute to seed dispersal (Coates Palgrave, 2002; Van Wyk and Van Wyk, 1997; http://redlist.sanbi.org).