Home » TYPES » Trees » Gymnanthemum coloratum inflorescence
Back to Category Overview
Total images in all categories: 11,779
Total number of hits on all images: 6,931,917 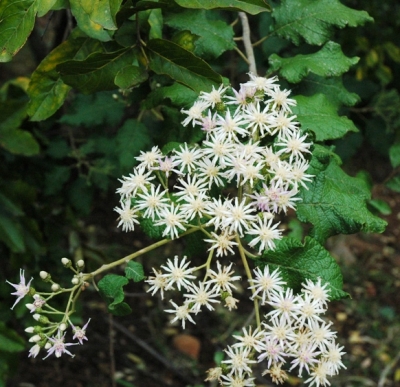 Gymnanthemum coloratum, commonly known as the Lowveld tree vernonia and previously as Vernonia colorata, is a small, scrambling tree or shrub reaching heights from 3 m to 6 m (SA Tree List No. 723.4).

The leaves are alternate, dark green and sparsely hairy above, paler and thinly woolly below. The margins are entire or serrated and wavy. The veins are prominent on both surfaces.

The strongly scented, pink or lilac flowers fade to white. They grow in terminal heads, seen from mid-autumn to early spring. The fruit is a small nutlet attached to a parachute-like pappus.

The species distribution is in KwaZulu-Natal, Mpumalanga and Limpopo, as well as widespread to the north as far as West Africa.

The habitat is open woodland, bushveld and grassland. The trees are seen on termite mounds and in riverine thickets. The species is not considered to be threatened in its habitat early in the twenty first century.

This is a well-known medicinal tree. The pretty flowers have also ensured its position as a garden plant. Young plants are frost-sensitive (Coates Palgrave, 2002; Pooley, 1993; www.redlist.sanbi.org).