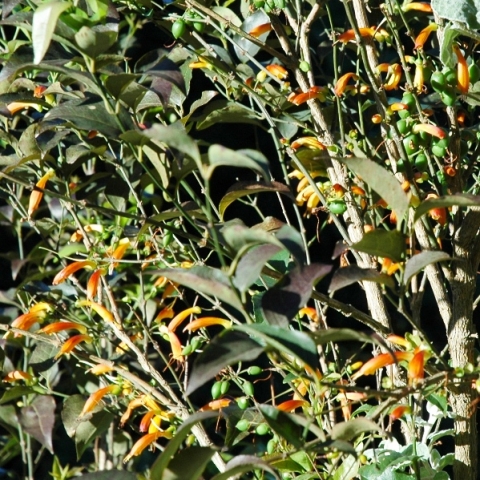 The species distribution is extensive, found in all South African provinces although absent from much of the dry northwest. It also occurs in many parts of tropical Africa.

The habitat is evergreen and swamp forests and forest margins, along streambanks and on rocky outcrops and slopes, from sea level to about 2100 m. The species is not considered to be threatened in its habitat early in the twenty first century.

Commonly the tree fuchsia or in Afrikaans known as kinderbessie or notsung, this tree has a long history of diverse usage by the people of southern Africa. The tree was grown in the Cape Town Government Gardens as well as in Europe since the beginning of the 19th century.

The old Cape Colony had timber shortage from the start. Controlled cutting of the better timber trees prevented the colonist farmers from denuding the countryside. They were allowed some access to wood by the authorities, for they largely had to manufacture furniture and wooden utensils for themselves. Free harvesting of H. lucida wood (and some other species) was permitted.

The name notsung comes from the German noun Nutzung, meaning the right to use or usufruct by the farmers and general populace. Many early Cape colonists could understand some German or were German. Cutting stems of H. lucida while leaving the base at ground level facilitates coppicing and continued growth for more poles later.

In Zulu traditional medicine the plant was associated with the treatment of several maladies, mainly to do with ear ache and skin complaints. Warding off evil and appeasing ancestral spirits also featured.

The flowers hold great attraction for birds due to abundant nectar. The tree fuchsia name refers to the flowers. Flowers, fruit and shiny foliage all contribute to adorn forests and outdoor living spaces for people. Today the notsung's main use is as a garden plant (Coates Palgrave, 2002; Pooley, 1993; www.plantzafrica.com; http://redlist.sanbi.org).