Home » TYPES » Trees » Halleria lucida flowers
Back to Category Overview
Total images in all categories: 11,792
Total number of hits on all images: 6,949,165 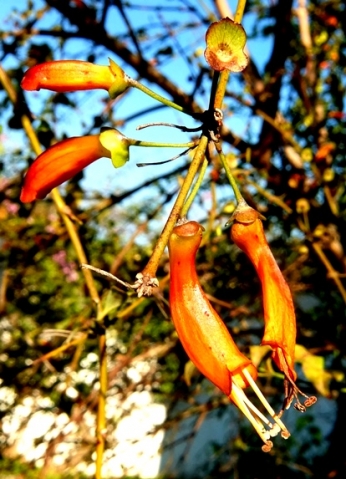 The flowers of Halleria lucida grow in dense clusters on the older wood or in small, axillary clusters among the leaves on new wood. The pedicels are long, allowing the flowers to nod or droop. The green or brown calyx is scalloped or its short lobes pointed.

The flower is tubular and curved, its colour orange, brick-red to dark red. The corolla tube bulges in its upper part, the four or five lobes at the tip short and rounded. The flower tube becomes up to 4 cm long. The stamens are far exserted from the corolla tube on older flowers, their anthers white or brown in picture.

The flowers produce much nectar, enticing whatever pollinators are equipped for receiving their prize from the long, curved flower tubes. Such a prize is, as usual, awarded for the transportation of pollen to other flowers nearby. Or rather, only for the uploading of the pollen.

The limited supply of nectar received from each flower serves as the incentive for searching further, visiting more flowers. This creates opportunities for pollen off-loads on other flower stigmas. In this way the plant achieves its goal from being in the nectar business.