Home » TYPES » Shrubs » Phymaspermum acerosum
Back to Category Overview
Total images in all categories: 11,905
Total number of hits on all images: 7,155,736 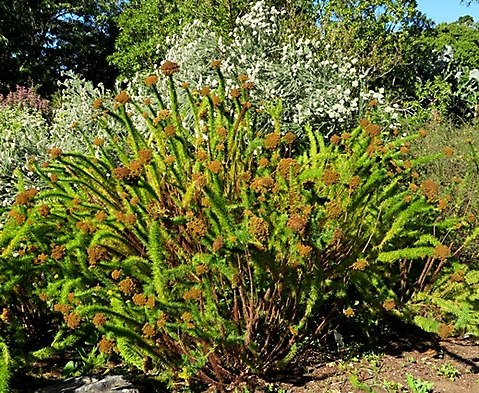 Phymaspermum acerosum, sometimes called the grassveld sheepdaisy, commonly known in Afrikaans as the geelblombos (yellow flower bush) and previously scientifically as Athanasia acerosa, is a multi-stemmed shrub that grows in colonies, reaching about 1,5 m in height.

The generic name, Phymaspermum, is derived from the Greek words phyma meaning swelling and sperma meaning seed, referring to the fruit-shape. There is also a swelling at the leaf-base of this species and low down on the styles of some species. The specific name, acerosum is derived from the Latin words acus meaning needle and -osum indicating abundance, referring to the numerous needle-like leaves.

The plant in picture was photographed in Kirstenbosch during June when the covering of stem-tip inflorescences had already turned brown. Blooming normally happens from late summer to early winter.

The species distribution is in the east of South Africa, from the Eastern Cape through KwaZulu-Natal and the Free State to Mpumalanga, Gauteng and Limpopo, as well as in some neighbouring countries.

The habitat is grassland and forest margins from the coast to elevations around 2000 m, often a pioneer plant. The species is not considered to be threatened in its habitat early in the twenty first century.

The plant is used in traditional medicine and as charms against lightning (Pooley, 1998; Onderstall, 1984; iNaturalist; http://pza.sanbi.org; http://redlist.sanbi.org).