Home » TYPES » Shrubs » Pharnaceum aurantium, muggiegras
Back to Category Overview
Total images in all categories: 12,068
Total number of hits on all images: 7,360,597 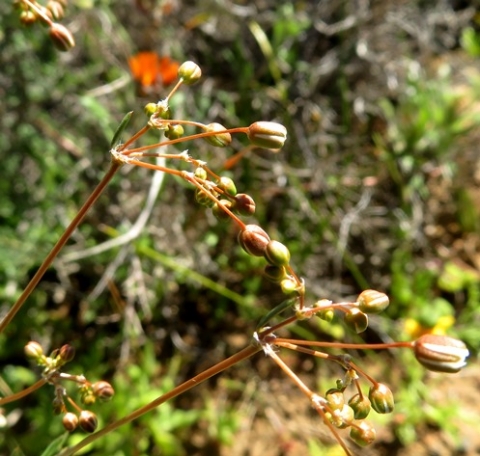 Pharnaceum aurantium flowers grow on long, wiry stalks in irregular clusters as the buds in picture. One of the plant’s common names in Afrikaans is muggiegras (gnat grass).

The association with gnats is thought to stem from the late winter and early spring flowering season when gnats appear, but many flowering plants bloom at that time.

The clusters of small brown buds in P. aurantium inflorescences resemble gnat swarms performing a flying dance in a spherical space in the air. Such an event, wondrous in itself, may have caught some imagination that acted on the likeness (Vlok and Schutte-Vlok, 2010; Manning and Goldblatt, 1997; Bond and Goldblatt, 1984; Leistner, (Ed.), 2000; iNaturalist).