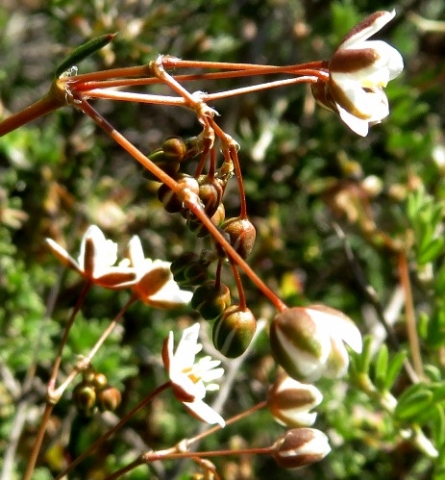 The Pharnaceum aurantium inflorescence is a terminal or stem-tip thyrse appearing like an umbel of flowers.

A thyrse is an inflorescence structure in which the main axis is a raceme and the secondary and later axes are cymes. A raceme is an inflorescence of which the separate flowers are attached by equal stalks at equal distances along a central stem. A cyme is a usually flat-topped or convex flower cluster in which the main axis and each branch ends in a flower that opens before the flowers below or to the side of it. An umbel is a flat-topped or rounded flower cluster in which the individual flower stalks arise from about the same point.

The inflorescence structure particular to the species is repeated similarly many times in flower clusters on the P. aurantium bush at bloom-time. In the early stages  the groups of brown buds resemble a swarm of gnats. Hence the Afrikaans common name for the plant, muggiegras (gnat grass) (Vlok and Schutte-Vlok, 2010; Manning and Goldblatt, 1997; Bond and Goldblatt, 1984; Leistner, (Ed.), 2000; iNaturalist; Wikipedia).