Home » TYPES » Shrubs » Phymaspermum athanasioides
Back to Category Overview
Total images in all categories: 12,068
Total number of hits on all images: 7,360,800 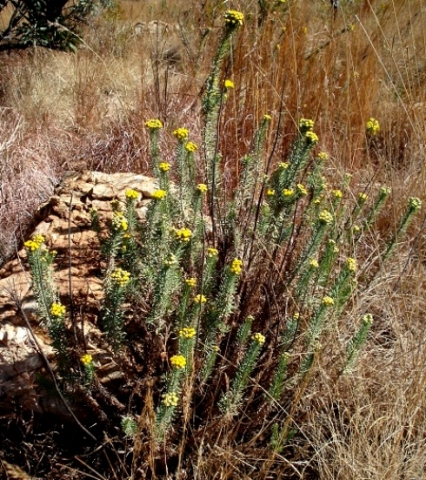 Phymaspermum athanasioides is a yellow flowering shrub that occurs widely in South Africa north of the Vaal River, Swaziland and a small part of the northern Free State; also further in southern Africa.

The habitat is open grassland on rocky slopes and hilltops. Plants growing on rocky outcrops around the brows of hills probably have better survival chances than those inhabiting arable lower slopes, blessed with coveted deep soil. Not surprising that this species isn’t considered threatened with stable populations sustained early in the twenty first century.

The Greek word phyma means swelling, while spermum means seed. The significance of this generic name was not found; the strong resemblance of this species to some plants in the Athanasia genus led to the specific name (Van Wyk and Malan, 1997; www.redlist.sanbi.org).