Home » TYPES » Shrubs » Pharnaceum aurantium anthers and stigma
Back to Category Overview
Total images in all categories: 11,523
Total number of hits on all images: 6,599,438 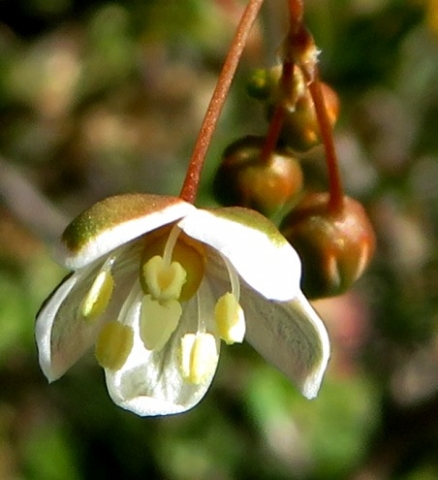 The five anthers of a Pharnaceum aurantium flower are borne by their curving filaments in a ring around the white stigma in the centre. They are cream and segmented, slightly taller than wide. The chunky stigma is white and positioned lower than the anthers, directly upon the pale brown, rounded ovary.

The thicker central part on the outside of each sepal is brown and green, the part that was visible before the bud opened. The sepals have to double up on duties in this flower: initial protection of the inner, soft parts inside the bud, followed by providing bloom-time allure for enticing pollinators. The flowers of this species have no petals (Vlok and Schutte-Vlok, 2010; Manning and Goldblatt, 1997; Bond and Goldblatt, 1984; Leistner, (Ed.), 2000; iNaturalist).